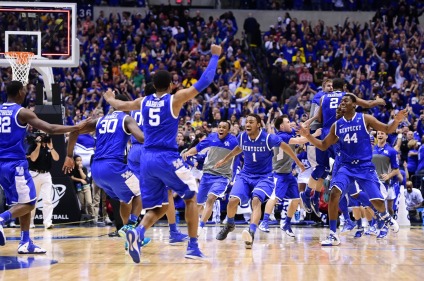 March Madness started out with a bang Thursday including eleven games finishing with final deficits of single digits and two 3 seeds immediately getting sent home. The round of 32 is concluding as I type this very sentence and is still giving us a reason to watch truTV (If someone can find me an answer as to why games are still broadcasted on that channel that would be greatly appreciated). But come tomorrow morning, everyone will be looking forward to the Sweet 16. There will be plenty of weekend recaps to help you catch up on everything you missed in the first four days of the tourney, but here are some things to keep in mind going forward.

Duke is good. Like, really good. Everyone always just assumes Duke will make a run in the tournament because, well, they’re Duke and that’s what they do. This assumption is once again correct come 2015, but this team is different. I normally think of Duke as the San Antonio Spurs of college basketball. They’re good no matter what, kind of boring to watch, and not very appealing to the naked eye. This team just seems a little different. Don’t get me wrong, I hate Duke. Can’t stand them. But these guys can play. Freshmen Jahlil Okafor and Tyus Jones are a ton of fun to watch while Quinn Cook brings along the veteran role at shooting guard. Justice Winslow is the energizer bunny for Coach K and is one of the best defenders in the entire country. And he’s only 18. Winning their first two games by a combined 48 points, this team is primed for a deep run. As much as it pains me to say, beware of Coach K and the boys.

Gonzaga is always the team that comes into the tournament with only three losses, but a weak regular season schedule. Being the victim of many premature upsets, the Zags seem deeper to me than they have been in the past. If this does turn out to be true, they could be quite the threat. Led by Kyle Wiltjer and millionth-year senior Kevin Pangos, Gonzaga is looking to build off of their WCC Championship and break their trend of disappointing tourney runs. Running into Duke in a potential elite eight matchup could create some problems for the Zags, but with Kevin Pangos’ hair, anything is possible. I feel like I’ve been watching this kid play at Gonzaga since I was in kindergarten, but they swear he’s a true senior. Whether you buy that claim or not, his hair has gone through some pretty incredible transformations over the years (which needs its own article in itself) and has definitely hit its peak here in 2015 as he’s pulling off the Marty McFly look to perfection. Plus they have two players named Przemek and Domantas. What’s not to love? Long live Kevin Pangos and the Zags’ tourney run. 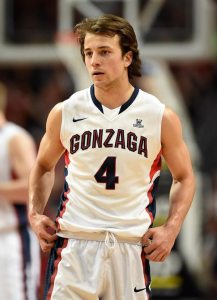 Find me better hair in college basketball. You can’t.

Ranked 18th in the country coming into the season, the Spartans season got off to a rough start. Quickly falling out of the top 25, Tom Izzo’s team struggled to find a consistent formula for success. Since the beginning of March, the Spartans seem like a different team. If anyone can get a team to peak at the right time, its Izzo. Coming in at a very dangerous 7 seed, the green and white beat Georgia and then upset 2 seed Virginia to push through to the sweet 16. Look out for the Spartans as it seems that elusive winning formula has finally found a home in their locker room. Don’t pick against Tom Izzo in March.

Next up for the Mountaineers is the almighty Kentucky Wildcats. They live and die by their smothering defense. As unbeatable as Kentucky seems, don’t assume West Virginia will be an easy W for the tournament favorites. The Wildcats haven’t faced a defense like this all year. I’m not saying WVU will pull off the upset, but I really think the Mountaineers will give Kentucky a run for their money.

I could touch upon every aspect of the tourney going into the sweet 16, but that would turn into a novel. Not many people realize this, but Andy Williams’ famous Christmas tune, “It’s the Most Wonderful Time of the Year”, was actually written about these three weeks of college basketball chaos. Soak it in, it doesn’t get much better than this.