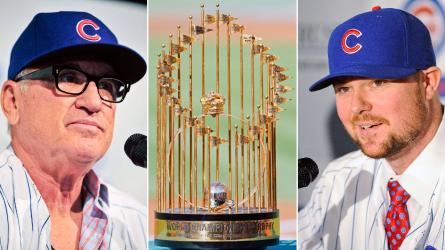 The wait is over. This is it. All those years of saying “Just wait, the Cubs will be good. You just have to give them some time” are over. We gave them time, and just like that, the Cubbies are a legitimate contender again for the first time in over a decade. The future is here. Of course, adding Joe Maddon as manager, some top-tier prospects, and all-star Jon Lester doesn’t really hurt either. Most people felt the rebuilding effort began when Theo Epstein came in as the Cubs’ president along with new GM Jed Hoyer in 2011. So how did this happen so fast?

A year ago, if you were to tell me the Chicago Cubs had 10-1 odds of winning the World Series I would have called you psychotic. But here we are, two weeks away from Opening Day, and the Cubbies look better than ever. Epstein and Hoyer are the perfect combination for a front office that has been chasing after a World Series title since 1908. Coming to Chicago in 2011, these two inherited an awful roster with very little hope. A team that would be borderline impossible to turn into a contender by 2015. But that changed this past offseason. The October pickup of manager Joe Maddon and the December signing of Jon Lester set the stage for the country-wide realization that the Cubs were going to be good again. Like, very good. Last year’s record of 73-89 is a thing of the past and the Cubs seem to be war ready entering April.

First baseman Anthony Rizzo and shortstop Starlin Castro are the team’s so-called veterans at age 25. Each of them are coming off solid 2014 campaigns hitting .286 and .292 respectively and are both under contract with the team through 2020. Ace John Lester at the top of the rotation followed by Jason Hammel and Jake Arrieta sets up a nice look for the mound at Wrigley. This base does wonders to compliment the Cubs’ tremendous abundance of youth.

Kris Bryant, Jorge Soler, Addison Russell, Kyle Schwarber, and Javier Baez. Each of these players is ranked in Baseball America’s Top 100 and not one of them is above the age of 23. Bryant is the number one prospect in all of baseball. He spent last year splitting the season between AA and AAA hitting an absurd .336 along with 43 homers. As spring training comes to a close this week, Bryant is hitting a cool .459 with 9 homers. Not too shabby. Soler had a brief audition with the Cubs at the end of the 2014 campaign and made the most of it with an average of .292. At age 20 last season, Addison Russell hit .295 and showed flashes of Barry Larkin at shortstop. Javier Baez slugged 37 homers last season in AA ball which is freakish power for a middle infielder. And Kyle Schwarber hit .344 in his first pro season last year and is currently tearing up the spring. Need I say more? The fountain of youth in Wrigleyville is filled with homers, gold gloves, Cubans, and potential. This is some of the greatest Cubs porn Chicago fans have ever been able to get their hands on. And it’s all about to become a reality.

As a Red Sox fan, I know very well the magic that Theo Epstein can create. The Sox were sitting on an 86 year title drought when he came to town. One year later the drought was over. Three championships later, he looks to do the same thing in Chicago. Joe Maddon quickly turned around an awful Tampa Bay Rays team into a consistent contender. There’s no reason to believe he won’t be able to do the same thing with an even more promising Cubs squad. You can laugh with him about his goofy glasses and bizarre hair, but you can’t laugh at him or his team. The Cubbies are no longer a joke. The future is now and the bandwagon is getting crowded. Jump on board and grab your seat because if you don’t, come October, you may find yourself wishing you did. 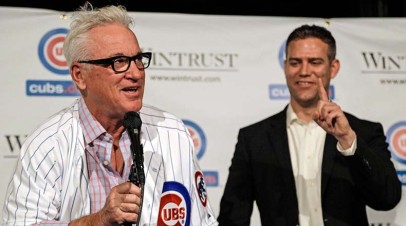 The mad scientist and his brilliant brain trust. I’m beyond excited to watch their elaborate plan unfold, and you should be too.