Now that the dust has settled and evaluations of the 60 selections have been completed, I think it’s time we make some 2016 NBA Draft observations of our own. I’m not a scout or a GM, and I can’t tell you how Georgios Papagiannis is going to look 4 years from now. However I can try to predict how he’ll get along with Boogie Cousins and maybe give a little insight along the way. This year’s draft was bizarre to say the least, but fun nonetheless. So here is the 10,000th rendition of the 2016 NBA Draft , winners, losers, and observations.

The Bucks have been in a difficult position since they received the 10th overall pick one month ago. Unlike last year, the 2016 draft was noticeably top-heavy, and drastically fell off around picks 8 or 9. If Milwaukee was strongly focusing on this point, I can MAYBE see where they’re coming from, however I’m not a believer in Thon Maker. He’s a long-term project who I don’t see becoming a successful NBA big man. Using a lottery pick on Maker was a pretty odd decision considering Milwaukee already has his length in Giannis Antetokounmpo and an athletic four in Jabari Parker (which is what they’ll try to mold Maker into). There are also questions surrounding his age as it was reported last week that many teams believed he could be much older than his reported age of 19. My teachers always told me to never trust Wikipedia, but I think the Bucks would’ve benefited from taking a peek at Maker’s page… 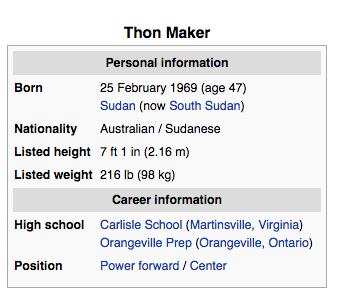 Bottom line: A huge risk for an unlikely reward. A waste of a pick is never my cup of tea.

It’s easy to jump to the conclusion that the Celtics’ draft was a total failure. With trade rumors swirling for the last year, Boston fans were on the edge of their seats waiting to see the blockbuster deal that Danny Ainge had been planning all along. However at the end of the night, the Celts had made one small trade, chosen two draft and stash Euro players, and picked Jaylen Brown earlier than he was projected to go. So yeah, I get it, it wasn’t the climactic ending that Celtics fans were looking for. But it’s really not as depressing as it seems. Sure, it was funny watching Celtics fans squirm as this all went down, however the restraint that Danny Ainge showed is a positive.

Jimmy Butler rumors were all the rage as the draft approached, and the Celtics were at the forefront of those murmurs. Butler’s a great player, but not worth dumping half of your assets. The trade market is a little depleted at the moment, and thus Butler was able to become the top option. Considering his history of injuries and what he brings the table, I’m not so sure he would’ve helped the Celtics like many people had hoped. Also, the Celtics managed to avoid getting involved in the circus that is Nerlens Noel and Jahlil Okafor. That right there is a win in itself.

Boston also picked up two prospects who could have (probably should have) gone much earlier in the night. Demetrius Jackson (Notre Dame) and Ben Bentil (Providence College) could prove to be the two steals of the night.

Bottom line: As anti-climatic as it was, Boston gained top-tier talent at the wing, and avoided the urge to make a questionable trade. Worth a head-scratch? Sure. But worth a tear? Defintely not.

Orlando will send Victor Oladipo, Ersan Ilyasova and rights to Sabonis to the Thunder, sources said.

You could approach this trade from many angles. Are the Thunder preparing for Kevin Durant to leave? Are they trying to appeal to him so he’ll stay? Are the Orlando Magic giving up on basketball forever? Who knows. But this trade was the blockbuster of the night.

For the most part, the Blazers stayed far, far away from this year’s draft. With the weak class, I don’t blame them. Portland quietly came into the second round to grab Maryland’s Jake Layman and then quietly exited the scene. Uneventful as it may seem, Layman provides the wing that the Blazers have needed ever so much these last few seasons. As a guy who can consistently hit the corner three, Layman helps a Portland team whose been on the outside looking in on the Western Conference’s elite for the last few seasons.

Lord give me the strength 🙏🏿

Boogie’s tweet says it all. The King’s are going to need all the help they can get. Sacramento needed help everywhere but the center position. So, naturally, the Kings go out and draft a center. Not only did they draft at a position they didn’t need, they drafted a prospect that wasn’t suppose to be picked anywhere near the lottery. Georgios Papagiannis has a great name, but I think that’s about all he’ll bring to Sacramento. Looking utterly dysfunctional as usual, the Kings did not disappoint.

Also, when asked about his draft night tweet shown above, DeMarcus Cousins said it was “Bad timing” and not in response to his team’s draft picks.

DeMarcus Cousins explains his tweet on Draft night: "Bad timing," he said. "It sounds ridiculous, but I was in a hot sculpting class."

This was one of the weirder drafts the NBA has seen in a long time. With international prospects galore, it was drastically different from last year’s highly touted class. Regardless, the draft means the start of the offseason, and the offseason means Las Vegas summer league basketball, and overpaying for under performing players.

And let’s not forget, the Summer of J.R. is just beginning.