Since making a World Series appearance in 2005, the Houston Astros have found a cozy spot at the bottom of the MLB standings. With below .500 records, no-name players, and unsuccessful management, Minute Maid Park quickly became home to baseball’s biggest losers. I wish I could call them lovable losers, but they weren’t familiar enough to be loved. Nobody knew the players or coaches and nobody felt the need to. With one losing season after another, Houston quickly became the MLB’s biggest afterthought. END_OF_DOCUMENT_TOKEN_TO_BE_REPLACED

For baseball, the month of April means a whole lot of overanalyzing. April stats can give off a trend that we’ll watch for the remainder of the season, or they can be misleading lies that ruin baseball fans’ summer months. Let’s take a look at what we’re dealing with this year. Determining if they will remain a fact or become fiction is up to you.

The Red Sox have pitching problems

This would be tough to debate as fiction. The Sox currently sit a game under .500 and have a team ERA of 4.85, nice enough for third worst in the league. With a batting order loaded with big hitters, you have to wonder when the front office in Beantown will make finally make a change. A team with this kind of expectations won’t stick with an ERA like that for very long. What many feared this offseason is quickly becoming a reality in Boston.

Through 27 games, Gordon is hitting an absurd .430 while flashing his dangerous speed almost every night for the Marlins. Although this isn’t sustainable for the season, his pattern of transforming games is. With his kind of speed, a simple infield single (which he has twelve of) can turn into a triple before you blink. Keep an eye on Gordon as the season moves forward. Plus he can dunk too.

“Who the hell is Devon Travis”, you ask? That was my first question too. He’s a 24-year-old stud-of-a second baseman for the Toronto Blue Jays who’s currently hitting .309 and slugging .598 alongside 7 homers and 23 RBI. Travis was highly touted in the Detroit Tigers farm system before being dealt to Toronto in exchange for Anthony Gose. Many are thinking he’s the league’s next star while others feel this is just a quick fad. Quick side note: Travis lost in the Little League World Series final in 2003 to Japan. Nobody roots for Japan in the Little League World Series, so does that mean we have to root for Travis now? Think about it, if you will. 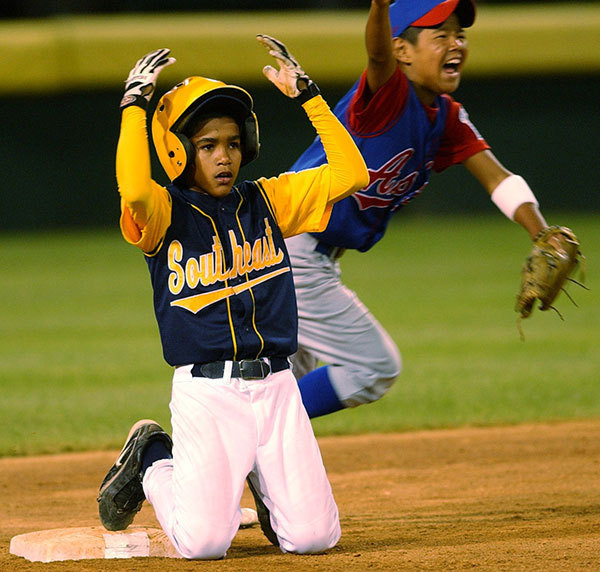 I refuse to type anymore about him. You’re welcome to go ahead and participate in independent research. Long live Jason Varitek.

The Astros are finally a legitimate team

No fact or fiction debate here, the Astros are here to stay. With Jose Altuve and Jake Marisnick leading the way, Houston is in good hands. The majority of people won’t know either of those names and that’s what makes it fun. All aboard the Astros bandwagon. They’ve been accepting passengers for years; now there’s finally reasons to fill the seats.

The Nationals entered the season as the most popular pick to win the World Series. They’ve stumbled big time coming out of the gate – going 7-13 through their first 20 games. The Nats will pull it together at some point, it’s just a question of how soon. No need for Nats fans to panic just yet.

The Royals are still rolling

Coming off the AL pennant, the Royals had a quiet offseason. However the boys in blue have started the season off with a bang sitting at 17-9 atop the AL Central. Maybe it was the time period in which I grew up in, but I’ll always see the Royals as the underdog – regardless of if they made it to the World Series last year. I’m totally rooting for the “underdog” here to stay hot all year long. So maybe they’re the favorites? Whatever, everyone loves a good underdog story. Even if it’s fake. They also lead the league in bench-clearing incidents. No shortage of entertainment in KC.

Big Sexy and the Mets!

The Mets are good! I never thought I’d be able to say it but the Mets are good! Entering Thursday, New York is 18-10 and leading the NL East. They’ve been so horrendous for so many years, you have to root for them. If their past downfalls don’t do it for you, Big Sexy will. 41 year-old Bartolo Colon is 5-1 with a 2.90 ERA and leading the charge. He’s 5-11, 285 lbs., and loves big hugs. If you can’t root for his team, at least root for Colon.

The wait is over. This is it. All those years of saying “Just wait, the Cubs will be good. You just have to give them some time” are over. We gave them time, and just like that, the Cubbies are a legitimate contender again for the first time in over a decade. The future is here. Of course, adding Joe Maddon as manager, some top-tier prospects, and all-star Jon Lester doesn’t really hurt either. Most people felt the rebuilding effort began when Theo Epstein came in as the Cubs’ president along with new GM Jed Hoyer in 2011. So how did this happen so fast?

A year ago, if you were to tell me the Chicago Cubs had 10-1 odds of winning the World Series I would have called you psychotic. But here we are, two weeks away from Opening Day, and the Cubbies look better than ever. Epstein and Hoyer are the perfect combination for a front office that has been chasing after a World Series title since 1908. Coming to Chicago in 2011, these two inherited an awful roster with very little hope. A team that would be borderline impossible to turn into a contender by 2015. But that changed this past offseason. The October pickup of manager Joe Maddon and the December signing of Jon Lester set the stage for the country-wide realization that the Cubs were going to be good again. Like, very good. Last year’s record of 73-89 is a thing of the past and the Cubs seem to be war ready entering April.

First baseman Anthony Rizzo and shortstop Starlin Castro are the team’s so-called veterans at age 25. Each of them are coming off solid 2014 campaigns hitting .286 and .292 respectively and are both under contract with the team through 2020. Ace John Lester at the top of the rotation followed by Jason Hammel and Jake Arrieta sets up a nice look for the mound at Wrigley. This base does wonders to compliment the Cubs’ tremendous abundance of youth.

Kris Bryant, Jorge Soler, Addison Russell, Kyle Schwarber, and Javier Baez. Each of these players is ranked in Baseball America’s Top 100 and not one of them is above the age of 23. Bryant is the number one prospect in all of baseball. He spent last year splitting the season between AA and AAA hitting an absurd .336 along with 43 homers. As spring training comes to a close this week, Bryant is hitting a cool .459 with 9 homers. Not too shabby. Soler had a brief audition with the Cubs at the end of the 2014 campaign and made the most of it with an average of .292. At age 20 last season, Addison Russell hit .295 and showed flashes of Barry Larkin at shortstop. Javier Baez slugged 37 homers last season in AA ball which is freakish power for a middle infielder. And Kyle Schwarber hit .344 in his first pro season last year and is currently tearing up the spring. Need I say more? The fountain of youth in Wrigleyville is filled with homers, gold gloves, Cubans, and potential. This is some of the greatest Cubs porn Chicago fans have ever been able to get their hands on. And it’s all about to become a reality.

As a Red Sox fan, I know very well the magic that Theo Epstein can create. The Sox were sitting on an 86 year title drought when he came to town. One year later the drought was over. Three championships later, he looks to do the same thing in Chicago. Joe Maddon quickly turned around an awful Tampa Bay Rays team into a consistent contender. There’s no reason to believe he won’t be able to do the same thing with an even more promising Cubs squad. You can laugh with him about his goofy glasses and bizarre hair, but you can’t laugh at him or his team. The Cubbies are no longer a joke. The future is now and the bandwagon is getting crowded. Jump on board and grab your seat because if you don’t, come October, you may find yourself wishing you did.

The mad scientist and his brilliant brain trust. I’m beyond excited to watch their elaborate plan unfold, and you should be too.

Ben Cherington has brought me a lot of joy over the past couple years and this Monday morning was no different. Up until today it had seemed like the Yankees or Dodgers may end up with 19-year-old sensation Yoan Moncada. But then Benny boy came sweeping in and bam; the Sox get the next Robinson Cano.

Paying $32 million for this kid means the Sox are going to get hit with a 100% overage tax. So really Cherington just said screw it and paid around $63 million for a 19 year old a phenom who looks like he’s 30. Moncada has a world of potential with no ceiling whatsoever. The dilemma now is where he will fit. His main experience is at third and second base, which are filled by Dustin Pedroia and Pablo Sandoval. Ideas of turning him into an outfielder are already beginning to circulate but it would be wise to pull the reins on this kind of talk. Moncada will be in the minors for at least two years and I have no doubt they’ll find a spot for him once he’s ready. If the kid can hit like they say, he’ll see the batter’s box at Fenway when the time comes.

This move helps bolster the Sox system, as Moncada immediately becomes their top prospect. That being said they now have plenty more pieces that can be dealt. Maybe this will help them push for that much needed number one starter or maybe Cole Hamels will stay in Philly and just slowly die in the Citizens Bank Park bleachers along with Charlie Manuel and Ryan Howard. Who knows?

But hey for now lets thank Cuban-loving GM Ben Cherington for feeling out the Cuban landscape better than JFK. In the meantime, I’m going to go watch highlights of a player who is younger than I am and will determine my happiness for the next ten years and counting.

What’re the odds this kid is actually 19?